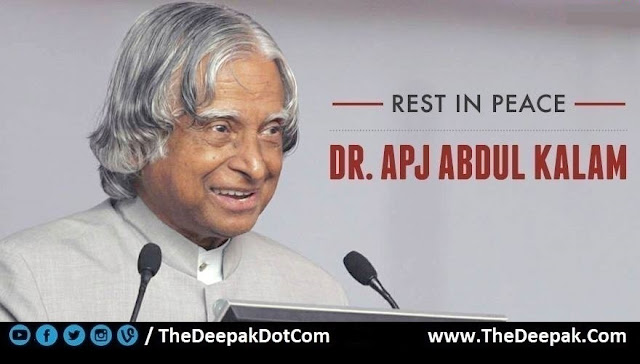 Dr. APJ Abdul Kalam popularly called the "Missile Man" of India, Dr APJ Abdul Kalam rose from humble beginnings and earned the reputation of being the "people's President" who endeared himself to all sections, especially the young.

Here are some inspirational quotes of the former president of India:

"All Birds find shelter during a rain. But Eagle avoids rain by flying above the Clouds."

"Failure will never overtake me if my definition to succeed is strong enough."

"Man needs difficulties in life because they are necessary to enjoy the success."

"Dream, Dream Dream, Dreams transform into thoughts and thoughts result in action. Dreams are not those which comes while we are sleeping, but dreams are those when u don’t sleep before fulfilling them."

"Difficulties in your life do not come to destroy you, but to help you realize your hidden potential and power, let difficulties know that you too are difficult."

"All birds find shelter during a rain. But Eagles avoid rain by flying above the clouds. Problems are common, but attitude make the difference."

"Love your job but don't love your company, because you may not know when your company stops loving you."

"I’m not a handsome guy, but I can give my hand to someone who needs help. Beauty is in the heart, not in the face."

"Man needs his difficulties because they are necessary to enjoy success."


Former president APJ Abdul Kalam passed away in Shillong on Monday. Kalam, 83, had been admitted to a hospital in the city, after he collapsed during a lecture at the Indian Institute of Management.

The former president was in a critical condition and had been admitted to the city's Bethany Hospital.

Kalam served as the 11th President on India from 2002 to 2007. Kalam, who was affectionately known as the People's President, was the third President of India to have been honoured with a Bharat Ratna, India's highest civilian honour.

He was also the first scientist and the first bachelor to occupy Rashtrapati Bhawan.